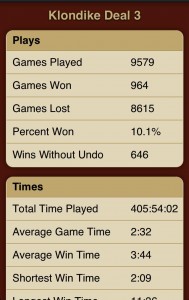 Today I had some time to kill. I grabbed my iPhone and started to play my usual time waster, Klondike solitaire. When I had finished losing again I thought I would look at the stats and see just how many games I had lost. The number is staggering, but even worse is the total time played, almost 406 hours! I’ve read the time management books and all the how to get things done ones as well, and I can safely say that wasting 406 hours on a game would fall into the “don’t do it” category. Just think about what I could do if I had that much time? That is almost 17 twenty-four hour days, or if you put it into work days that is over 50! I have spent over two months of work days at an average of two minutes and thirty-two seconds playing solitaire. I either have to get a life, or find a game that doesn’t tell me that I don’t have one!