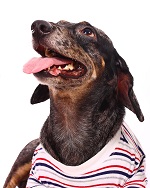 We adopted a dog from the pound a few years back he is cute but not the smartest dog I ever had. After a few years he just suddenly started wasting away. We took him to the vet and after a bunch of tests we found out he has Addison’s disease. Despite having to give him steroids every day he has been a normal dog. That was until yesterday, I awoke to a house covered in barf and poop and a listless dog. I figured he had gotten into something he should have and since he was not tossing his cookies anymore I would just watch him and see if he recovered. After renting and using a carpet cleaner to get our home back from the wasteland I noticed the dog continued to go downhill so after I watched him pass blood I decided it was time to visit the emergency vet. Well after going to the vet twice and getting home at Eleven pm with my pocket-book a few thousand dollars lighter; I really started to wonder the sanity of having pets! Besides the black hole of cash that pets can be, having to clean up after them when something goes wrong, paying for treatments that may or may not save the critter and the fun of having to deal with the end of life just suck! Just when you get really attached to them they go off and get hit by a car or eat something that they shouldn’t, and then you have to decide to put my kids through college or save the dog. Luckily this dog made it through the crisis but my kids will have to change the cafeteria meal plan.