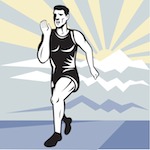 So this weekend as I was doing my really dumb thing of trying to run up Pikes Peak with a thousand other insane people, I started to really question my choices. At mile ten I really wondered why I would do this to myself. It was about mile eleven when I started to hear from behind a man yelling things like ”start jogging here” or “don’t stop”. As they got closer and closer I continued to hear this guy barking at someone to do what ever it was he wanted them to do. I figure out that this was some sort of personal trainer who was running with a client; at least I hoped that what it was, trying to motivate them to complete the climb to the top. I don’t know about you but the only thing I wanted to do was punch this guy. If he had yelled at me I would have tripped him off the side of the mountain. Maybe it is my age but external motivation doesn’t work anymore, if I don’t want to do it, it is pretty hard to get me off the couch. I can’t afford a personal trainer and if that is what they do I don’t think I want one. However, listening to this guy yell at someone else did take my mind off my problem for a few minutes, so I would like to thank the lady who ran with this dork for that.