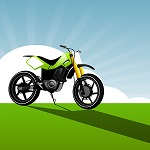 I grew up with an uncle some of us swear, was trying to kill us. He built a tree house high up in a tree with a big slide to the ground which some of us fell out of. He would build jumps for us to ride mini-bikes off and allowed us to walk on the roof and large brick wall. I was his nephew so I wasn’t in the direct line of fire but my cousins have some great stories of harrowing events. I frankly look back with fondness to all the crazy things we did. Riding our bikes off of the roof into the pool in or backyard is a highlight of my childhood. Yes I broke bones and got bruised on occasion but was it really “bad” for me as a person to have done all of those things? These days we put rubber bumpers, helmets, and safety warnings on everything and I am not convinced it is for the better. I learned that some of my fears were unfounded and that I can do way more than I think I can. The lesson of doing things I fear and even sometimes getting hurt made realize what I am capable of. The other day a young man was on trial for killing four people while driving intoxicated. He used Affluenza as his defense. Basically he said he was so coddled and spoiled it prevented him from connecting to his bad behavior. While I don’t agree this kid should get off because of this, I do believe there is a point to his defense. The more we remove the consequences of our actions and the bumps and bruises we get from going past the “safety zone” in life the less we respect it. Those bumps and bruises and even the scares are reminders of just how much I can do, and they make me respect what I can’t!