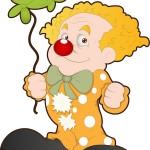 Since I missed my follow-up yesterday I thought I would pick up where I left off. When you are a little weird it is pretty normal. Everybody is a little weird. But like a scale it can get past the normal weird and off into creepy. Creepy like white van with no windows creepy, old drunk clown creepy, circus performer creepy. For a short while I lived in a place I affectionately called “motel hell”. I called it that because it was single room apartments with a bean-shaped pool in the middle much like a motel. You rarely saw anyone coming or going and no one sat outside. Every day when I came home a guy on the end unit would be sitting on the floor of his apartment with the door open. As I came up the stairs he would stare at me from the corner all the way to my door never taking his eyes off me. That was creepy, did I mention he was in shorts and no shirt, extra creepy! Then as if to magically come full circle if you get really weird like paint a picture by throwing broken glass on a canvas and then walking all over it making patterns in your blood, you are suddenly cool again. So I guess the idea is to either be a little weird or a lot, because in between is creepy.